Weekly Oregonian Statesman (Salem) 15 Apr 1898
Testaments files with the County Court yesterday: Estates of Geo W B Parkes and Joseph Hassing Divided among the Respective heirs.
The last will and testament of Geo B W Parks, whose death occurred on March 28, 1895, was filed for probate yesterday. The will, which bears the date of July 15, 1896, disposes of real and personal property of the value of $5000. The will directs that all the just debts and funeral expenses be paid out of the estate; the reminder of the estate do be divided to the children of the decedent.
Mary A Palmer, aged 52 years, and Nixon E Palmer, aged 22 years are named executors of the will. Thomas Palmer and John English were the witnesses to the testament, and certify to the genuineness of the document. The heirs named are:
Mary A Palmer, daughter aged 52 years, of Marion County, Oregon. William W Parkes, son, aged 51 years of Cheyenne, Wy; Robert H Parkes, son, aged 48 years, of Lewiston, Idaho. The heirs of Lottie E Palmer, daughter: Mary Palmer, aged 26 years, of Lebanon; Emma Reed, aged 24 years, Portland; Nettie Palmer, aged 9 years of Marion county, and Nellie Palmer, aged 9 years, of Marion county; Caleb A Parkes, son, aged 44 years of Colton, Washington. James R Parkes, son, of Concord, Washington; George B Parkes, son, of Concord, Washington; Flora McAlpin, daughter, of Kiona, Washington.
Decedent was 80 years old when the will was made and signed.5,6
Mary Ann Parks was Taught School before 1869. 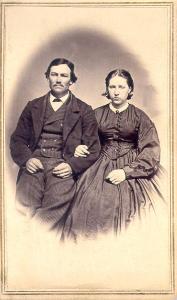