On son Robert H's death certificate, he is listed as "William" apparently. No one has seen the image of the original.

I see a note for Robert H Parks that his father is listed as "William" (not George Ballard William) Parks. And, his age is two years off. What I don't know, because I'm finding only an abstract, is which of his six children, or Polly, his wife. In fact, I guess I don't know why I think this is "our guy" except that he lived in the right neighborhood.
According to GBW's probate, Robert H Parkes, 48, was living in Lewiston, Idaho, in 1898.
In 1920, he was 70, divorced, living with his brother, Jim R Parks (James Roy), 60, and his daughter, Edna McKenzie, in Kiona, Benton County, Washington.
In 1920, his son Jacob H, 36, wife Carrie H, 30, son Roy O, 5, son Ralph H, 2 7/12, dau Luella B, 1 3/12, and Jacob's brother, Ora W (Ora Wade), 21, b Idaho, are living in Pleasant Valley, Okanogan County, WA. It's not that far between the two.
So, I suspect it is him.
GBW had been dead for over twenty years, by this time.
In 1930, GBW's grandson Ora Wade and his family are still in Pleasant Valley. I don't see anyone else off hand. Ora was born in 1899, so he neve knew his grandfather.
Well, all for now. I'm speculating that one child or grandchild, got this wrong. No other record has "William" and actually, "Wade" is more likely, but I'm not going to the bank with that either.)

In the 1860s, GBW ran pack trains from Douglas County, Oregon, to the silver mines in Idaho, a distance of over 500 miles, using a combination of the rivers and mule trains. By land, it would be farther.

According to family legend, BGW used the rivers (Willamette, Columbia and Snake) to Lewiston, Idaho, where they changed to pack mules for the remainder of the trip. It is possible that they took a land route to the Dalles, and picked up the Columbia there, above the falls.

We do not know what they were packing, but an article in the Oregon State Journal dated 12 March 1864, describes that years trip.

Pack trains are now passing through, or leaving here, almost every day for the mines. Mr. George Parks, of Douglas county, left here on Monday, with several animals, for the upper country, where he has a train that he used between Lewiston and Bannock last summer. Others have passed through during the week. From present appearances it will be but a very short time till the McKenzie route will be open to the travel. Persons passing through will then fit out here, instead of at the Dalles, and save two hundred miles travel, and much unnecessary expense.6

In 1876 George and Cynthia relocated to Whitman County, Washington.8


From Nellie Palmer Dunford notes.
About 1970 Nellie (Palmer) Dunford, granddaughter to GBW and Cynthia, wrote her understanding of the family history.

Notice the "Kale" and "Kalope" name on some records. This was Caleb Andrew Parks.9

Around 1890 GBW relocated to Oregon, where daughter Mary Ann, her husband George Washington Palmer, and their family were living in Marion County, growing hops.
Due to his fading memory, she obtained guardianship, in order to manage his affairs.12 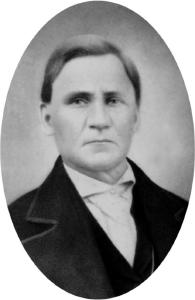