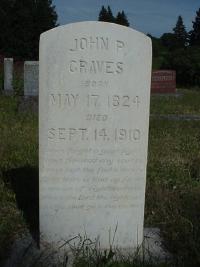 In the 1900 census, John P Graves, son Grant and his family, and son Wilber, are living in Elk City, just doors from the Parks and Ramsdell families.

In 1910, he is living with daughter Flora, her husband, C W Hobart, and son Lee, in Monitor, Marion County, Oregon.

One puzzling piece of information is that the 1860 census for Middletown, Prairie Twp., Montgomery Co., MO, dwelling 895, lists John Graves, 27, carpenter, Ann Graves, 20, William Graves, 23, Witcher Graves, 19, and James Graves, 18, all born in VA. This appears to be some of the children of John Graves and Mildred George, and they all match except for John Pinkard Graves. In addition to the age discrepancy of about 10 years for John P., he supposedly moved to Oregon about 1850. In the 1870 census for the same place is a John Graves, 37 with wife Sarah, 23, and daughter Cora, 1. Could the information for John Pinkard Graves be wrong? (R?179, R?186, R?335, R?915)"


My research, including family records, show that this is the uncle.

John Pinckard Graves is the son of William and Lucy (Berger) Graves, not John and Mildred Hicks (George) Graves. John [Jack], Mariah, along with her brother William and his wife, Jane Jett Graves, Jack's sister, all moved to Oregon before 1850. Brother Tom Graves, sister Catherine Nowlin Graves, her husband, John Henry Palmer, and their family followed in 1853.

I did find a "John Graves" in the 1850 census, age 25, in the household with a Mildred Graves in Montgomery County, District 61.

Samuel went on to become the founder and "father" of Spokane, Washington.

I have tried to correct the information to no avail.
I have been unable to determine who wrote the original assumption.4,5 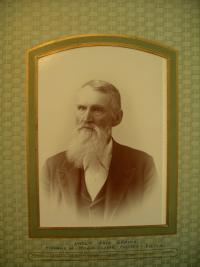 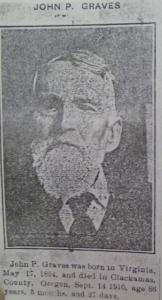