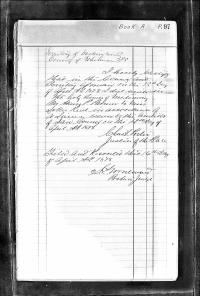 "Mrs. H. L. Palmer, who has been sick for some time died on the 18th. The remains were taken to Silverton for burial."

"Died at Elk City, Thursday, June 17, 1897, Mrs. Lottie Palmer, with bilious calucli......"
This was probably some sort of gallbladder issue.9 She was buried Miller Cemetery, Silverton, Marion County, Oregon, although she is listed in "At Rest in Lincoln County" as buried in Elk City Cemetery. In Miller Cemetery, near Silverton, Marion County, Oregon, a common tombstone contains the information of her father, GBW Parks, on one side and includes her information on the obverse. A death notice in the Lincoln County Leader, dated 24 Jun 1897, p 4, states, "The remains were taken to Silverton for burial."9 Her estate was probated in October 1898 Probate on Lottie's will occurred in 1898. On 14 Oct 1898, as part of the probate, the following appeared in several issues of the Lincoln County Leader, Toledo, Oregon:
Notice of Sale:
In the County Court of the state of Oregon for Lincoln County.
In the matter of the estate of Lottie E Palmer, deceased.
To Mary A Palmer, Emma Reed, Nettie Palmer, Nellie Palmer, Henry L Palmer heirs at law of Lottie E Palmer, deceased and to the public.
Notice is hereby given that we, Henry L Palmer and Mary Palmer, executors of the estate of Lottie E Palmer deceased above named will on Saturday, November the 11th 1898, at the hour of 10 o'clock a m, of said day in the city of Toledo in said county and state offer for sale at public auction upon the following terms, to-wit: One-third cash in hand and balance on five years' time on good approved security with interest at 10 per cent per annum. The following described real property: The Northeast quarter of the East one-half of section 36, township 11 suth of range 10 west of Willamette meridian, containing 160 acres. Also beginning at a point 600 feet east of the northeast corner of Lot No 7, Block No 9 Jones' addition to Toledo, Lincoln county, thence east 400 feet thence south 230 feet, thence west 200 feet, th' north 30 feet, thence west 200 feet thence north 200 feet to place of beginning containing 2 acres more or less. Also beginning 225 feet east of northeast corner of Lot 7, Block 9 Jones' addition to Toledo, thence east 200 feet thence south to line between B F Jones and F M Stanton, thence west 200 feet thence north 200 feet to place of beginning, all situated in Lincoln county, Oregon.
Dated at Toledo, Oregon, October 10, 1898,
Henry E [sic] Palmer,
Mary Palmer,
Executors

Weekly Oregonian Statesman (Salem) 15 Apr 1898
Testaments files with the County Court yesterday: Estates of Geo W B Parkes and Joseph Hassing Divided among the Respective heirs.
The last will and testament of Geo B W Parks, whose death occurred on March 28, 1895, was filed for probate yesterday. The will, which bears the date of July 15, 1896, disposes of real and personal property of the value of $5000. The will directs that all the just debts and funeral expenses be paid out of the estate; the reminder of the estate do be divided to the children of the decedent.
Mary A Palmer, aged 52 years, and Nixon E Palmer, aged 22 years are named executors of the will. Thomas Palmer and John English were the witnesses to the testament, and certify to the genuineness of the document. The heirs named are:
Mary A Palmer, daughter aged 52 years, of Marion County, Oregon. William W Parkes, son, aged 51 years of Cheyenne, Wy; Robert H Parkes, son, aged 48 years, of Lewiston, Idaho. The heirs of Lottie E Palmer, daughter: Mary Palmer, aged 26 years, of Lebanon; Emma Reed, aged 24 years, Portland; Nettie Palmer, aged 9 years of Marion county, and Nellie Palmer, aged 9 years, of Marion county; Caleb A Parkes, son, aged 44 years of Colton, Washington. James R Parkes, son, of Concord, Washington; George B Parkes, son, of Concord, Washington; Flora McAlpin, daughter, of Kiona, Washington.
Decedent was 80 years old when the will was made and signed.12,13
(an unknown value.)14

Children of Charlotte and Calvin

Children of Charlotte and Henry