In Memory
Died. -- At her home near Elk City, June 10, 1896, of inflamation of the stomach, Katie Palmer, aged nine years and six months.
The funeral was held at the Palmer school house and was attended by a large circle of friends and neighbors. The services were held under the auspices of the Salvation army, and conducted by Miss Ona Ramsdell, captain in the Army, who spoke very impressively of the great power of Christianity to benefit the world, the beauty and innocence of youth, the certainty of children being saved, the immortality of the soul and the great beyond to which we are all tending.
Katie was the pride of the household and a very bright child -- bright beyond her years. She was buried in the Howery cemetery near the Big Elk river, surrounded with the most beautiful mountain scenery, where the sweet soft sounds of the waterfalls sing a requiem to her grave. The grave was decorated with wreaths and bouquets of beautiful flowers, the tokens of love and friendship. 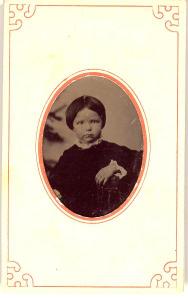