Nixon and Mary Turner were married 11 October 1803 Garrard County, Kentucky, Bond 11 Oct 1803, signed by James Beazley. No return indicated.2 Nixon Palmer died between 1810 and 1811 Garrard County, Kentucky.
P 410
This Indenture made this twenty sixth day of December in the year of our
Lord Christ one thousand, eight hundred nine. Between Nickson Palmer of
the County of Garrard and commonwealth of Kentucky of the one part,
and John Palmer Junr of the County and State aforesaid of the other part
Wittnesseth that the said Nickson Palmer for and, in consideration of, natural
affection and of a desire to advance the said John Palmer into a free and,
peaceable possession of my personal estate[.] I the said Nixson Palmer hath of my
own free will, and, choice freely given granted and confirmed conveyed and [set?]
to the said John Palmer his heirs exators or adms all and singular the follow
ing goods and, chattles ([biz?]) provided however that, the said John Palmer doth
from this time forward and as they become due pay off all my just debts as
they become due &c (and further their is nothing in the deed of gift shall be so
(continued)

contrived to reincounter [recounter ?] with an article of agreement made and entered into between
myself Nickson Palmer and Burtin Palmer which article of agreements
bears the date the 19th day of December 1809 but in confirmity thair with which will
more fully [appear] & by having reference to said articles) I do hereby give as
above to the said John Palmer Junr all my personell estate consisting of
horses, cows, sheep & hogs with my hous hold kitchen furniture together
with my farming tools as soon as they are free from the articles refered
to above together my real estate consisting of three hundred and twenty
and one fourth acres of land on which I am seated and I the said
said Nickson Palmer for myself and for my hairs Exators and admrs doth
hearly covenants and agree to and with the said John Palmer Junr his
hairs Exators and admrs that of the said Nickson Palmer shall and will
warrant and forever defend the said prersonal and rel estate hearby given
from me my hairs Exators and admrs and from the claims of all and
every other person or persons whatsoever. In witness whereof I the said
Nickson Palmer hath hereunto set my hand and caused my seal to
be fixed on the day and year above written.

Nixon is listed as a tithable in 1773, in Buckingham County, Virginia. He would have to be 16 by that time. He died between 1809 and 1811 KY He signed an indenture giving over land to John Palmer Junr in 1809. John Junr agreed to complete details of the indenture in 1809. Check on the courtcase where John gave land to Mary Palmer, widow in 1812.

Children of Nixon and Mary

Family of Nixon and Mary 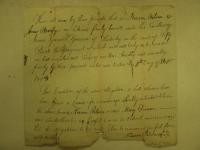