Previously, on 9 March 1921, Andrew Burton was scheduled aboard the Nieuw Amsterdam, leaving Rotterdam. Apparently he wasn't on the ship, as his name is crossed out.

What happened? Just a few months later, he dies in an "insane asylum" in San Antonio. 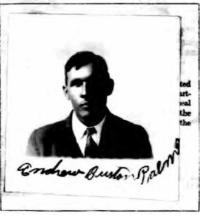