San Francisco Bulletin, 4 August, 1884, p. 2
Death of a San Francisco Attorney.
A private dispatch was received to this city last night from San Luis Obispo, stating that William J. Graves, an attorney of this city and ex-state Senator, had died on the steamer on her down trip. The deceased married a Spanish lady of San Luis Obispo who survives him. He also leaves several grown-up children.

THE LATE W. J. GRAVES
IMPOSING FUNERAL CEREMONIES.
San Luis Obispo, August 5. The interment of the late W. J. Graves took place today, and was the largest demonstration of respect ever exhibited in this city. A grand High Mass was celebrated at the Catholic church at 9:30 A.M., during which a most eloquent sermon and panegyric was delivered by Father Pugol. The body laid in state in the church until 2 o'clock P.M. when the funeral took place. When the ceremonies were completed the funeral procession was formed, under the directions of General Murphy and C.J. Russell. The pall-bearers were Frank McCoppin, J. M. Fillmore, William Buckley, D. W. James. J. C. Baker, Judge Venable, Jeffrey Phelan, H. K. Woodside, E. G. Dana. Mayor E. B. Morris, L. M. Warden, C. H. Ivens, H. O'Conner, W. M. Jeffreys and C. H. Johnson. The cortege was over one mile in length. All the business houses were closed and a great many were draped in mourning, and the scene presented was most imposing as the procession slowly marched to the cemetery. The Superior Court and City Council adjourned in respect to the memory, of the deceased, and the Bar, after passing appropriate resolutions, attended the funeral in a body.
SURPRISE AND REGRET AT HIS DEATH. San Buenaventura. August 4. People were astounded here to-day on hearing the news of the death of ex-Senator William J. Graves. Ernest Graves, District Attorney of San Luis Obispo county, who was here on legal business, left immediately on receiving the news. Senator Graves was highly esteemed and a leading attorney of this part of the State. He represented this district in the State Senate in 1874 and was also a member of the Constitutional Convention. He was one of the pioneers of the State, arriving here in 1849. He served as First Lieutenant in the Mexican war under Sterling Price.2 and was buried Old Mission Cemetery, San Luis Obispo, San Luis Obispo County, California.3
He has been called Buck. He Graves, William J. of San Luis Obispo County, Calif. Member of California state assembly 2nd District, 1855-56, 1857-58. Burial location unknown. He was educated; Studied law under David Nowlin. He served in the Mexican American War, with Gen Kearney. He served From Fold 3:
William J Graves is listed as a First Sergeant in Company A, Easton's Battalion, Missouri Infantry, for the Mexican War.

In looking at the battalion, we find:
Campaign streamers for this unit include New Mexico, 1847, and Chihuahua, 1848.

Children of William and Soledad 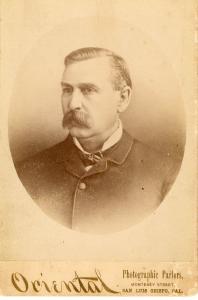