#604, b. 8 June 1827, d. 31 December 1876
Jane Jett Graves was born on 8 June 1827 Pittsylvania County, Virginia. She was the daughter of William Graves and Lucy Berger. Jane and William Glover, son of Philip Glover and Sarah Koontz, were married 17 October 1843 Montgomery County, Missouri.1 Jane died 31 December 1876 , Marion County, Oregon at age 49 and was buried on 12 January 1877 Miller Cemetery, Marion County, Oregon,
There is a story that she was buried with one of the Palmer children in Gibson Cemetery, but the graves have been removed to other cemeteries. She died in 1876, he in 1892, yet their markers are clearly "mates." Could she have been moved to Miller Cemetery after his death? Or, could this be a cenotaph?2
Jane and her sister Catherine were probably sent to school before 1841 St. Louis, Missouri.
The family story is that due to the early death of their mother, in 1837, Jett and Catherine were sent to some kind of boarding school. The extremely brief mention of Jette and Catherine in their cousin David's book indicates they weren't around the neighborhood as the boys were. There is no documentation of this to date, other than the “family tradition” that John Henry Palmer met Catherine when "she was at boarding school in St Louis." A study is currently underway to determine which of the many "girls' schools" in the St Charles and St Louis areas may have been chosen.3 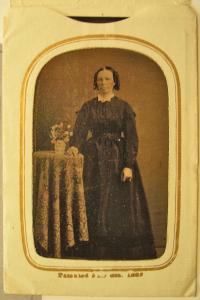