This may be the "Dicey" Graves who married William J Staniford. She is listed on the 1900 census as Dicia M.

George B. is a Tailor, William B is an Agent for [W.F.E] (federal express?)
I'm saying yes.

"Thirteenth Special Maid Of Honor And Representative Of San Luis Obispo County...
Was Miss Dicie May Graves, selected by the Board of Supervisors of that county to be its representative at the celebration at Monterey, and chosen by California as a Special Maid of Honor. In her the streams of the blood of the American and Spanish races are united, and that which once flowed in hot currents of fierce antagonism has found a tranquil and placid reservoir from which new rivers of life will flow on for all time in our Golden State. The olive tint of the mingled Castillian and Mexican blood is crimsoned with that of the sturdy Anglo-Saxon, and produced a marvelous type of beanty peculiar only to California and stamped indelibly a new character among the people of the Pacific Coast. She is the danghter of Mr. Ernest Graves, of San Luis Obispo, and on one side a granddanghter of Comrade William J. Graves, a veteran of the Mexican War, and on the other the great-granddanghter of Jesus Jose Pico, of Fremont fame, whose life was forfeited by a violation of his parole, but saved by the pleadings of his distracted family and the magnanimity of Fremont's clemency and humamty.
Miss Graves completed the list of the thirteen Special Maids of Honor to California among whom five counties of the State were represented.
*History of the celebration of the fiftieth anniversary of the taking possession of California. . . "
Associated Veterans of the Mexican War. Carruth and Carruth Printers, 1896.2

Family of Mary and William 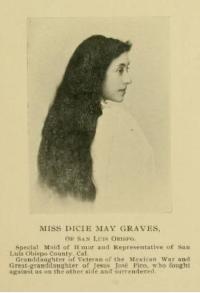